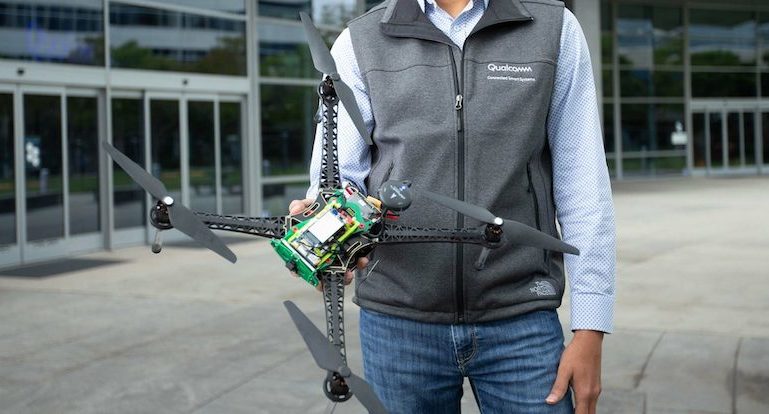 Flight RB5 5G, powered by the Qualcomm QRB5165 processor, builds on Qualcomm Technologies’ latest IoT offerings, providing a solution that will drive the next generation of high-performance, low-power 5G drones. The company said it was able to condense several complex technologies into an integrated, autonomous drone system that could be applied to a variety of new use cases in industries such as filming and entertainment, security and emergency, delivery, defense, inspection, and mapping, with its seven high-resolution cameras capable of operating simultaneously.

“We are proud to continue driving the digital transformation of diverse industries around the world with the launch of the Qualcomm Flight RB5 5G platform, a solution designed specifically to develop drones with enhanced autonomy and intelligence capabilities,” said Dev Singh, senior director of business development and general manager of autonomous robotics, drones and smart machines at Qualcomm Technologies.

The drone consumes very little power and uses AI and machine learning capabilities to enable the drones to be fully autonomous. In addition, innovative features in the cameras ensure high performance and excellent images, and 5G and Wi-Fi 6 connectivity systems enhance the drones’ critical flight capabilities to ensure a line of sight beyond what a remote pilot could reach, ensuring greater safety. A secure processing unit also gives the new Qualcomm Flight RB5 5G platform cybersecurity capability for data protection.

The announcement comes on the heels of the successful Ingenuity mission to Mars. Qualcomm worked with NASA Jet Propulsion Labs (JPL) to develop technologies and solutions used in the Ingenuity helicopter and prepare it for the first powered flight to another planet. The design of this helicopter began in 2014 and involved rigorous testing and innovation, aiming to expand the horizon of exploration, research, and data analysis for future space missions.

Ingenuity’s main obstacle was its own operation. As signals take minutes to arrive, it would be impossible to control the helicopter remotely in real-time. Instead, it would have to receive autonomous operation commands transmitted from millions of miles away and with delays of 3 to 22 minutes.

The next big challenge would be to ensure that the autonomous system had sufficient high computing power and, at the same time, low power consumption since much of the helicopter’s power consumption would come from a heater to keep components warm on Martian nights. Qualcomm Flight was not originally designed for space travel but had powerful autonomous operating capabilities that would be a great starting point to meet this challenge.

Radiation and atmospheric conditions on Mars should also be taken into account when choosing the robotic platform. Extreme temperatures could wear out parts very quickly, and some forms of space radiation could damage silicon. Normally, full testing would be ideal, along with space hardening. JPL came to the conclusion that certain properties of the Qualcomm Flight technology would reduce the risk of failure and meet the needs of flight on another planet.

Qualcomm’s extensive testing methodology in commercial uses also contributed to the project.  Rigorous hardware testing was conducted in the company’s labs and tests that simulated Martian conditions here on Earth.

According to Qualcomm, the project was a unique opportunity to test its platform in extreme conditions and produced valuable learnings that can be applied in technology development for future space missions using commercial and research technologies and also to drive the company’s robotic innovations.