Home > IoT > What does IoT have to do with blockchain?

What does IoT have to do with blockchain? 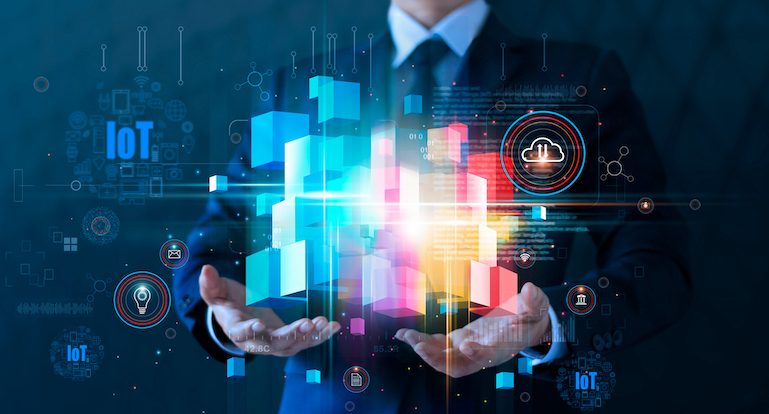 With the advancement of the Internet of Things (IoT), which is already permeating several industries such as manufacturing, transportation, and retail, the concern is also growing: how to ensure that IoT devices are secure and free of vulnerabilities, so they do not become an easy target for cybercriminals seeking to hack them to launch DDoS attacks. Security is precisely one of the main factors that have hindered the wider deployment of IoT devices on a large scale.

Another problem with current IoT networks is scalability. Centralized authentication and authorization systems for IoT devices will become a bottleneck as more and more IoT sensors and equipment are networked.

So why not give these devices an identity that can be efficiently validated and verified throughout their lifecycle to avoid crises arising from lack of security and scalability?  And who can do that? The answer is blockchain.

Blockchain technology can be seen with a distributed book of records, shared between ecosystem participants, that lists chained transactions and produces a history – each block in that chain is linked to all previous ones using encryption to prevent tampering; it cannot be altered or removed. Applying this concept to IoT, each device can have its own public key (identity) and its history of activities recorded and traceable throughout the blockchain. These IoT devices can even develop a reputation based on this history.

For example, a community in Brooklyn, New York (USA), is using blockchain to record solar energy production and allow the purchase of excess energy credits. IoT devices have their own identities and build their reputations based on historical logs and exchanges. All in a trusted way. “Blockchain has the capabilities to bring the element of trust currently missing from IoT through user diversity,” says Jerry Cuomo, vice president of blockchain technologies at IBM.

Due to the decentralized nature of blockchains, IoT solutions based on a combination of the two technologies also do not have to bear the indirect costs that would come from a central control and authentication authority if another security method were adopted for IoT devices and networks. In other words, no controlling entity needs to take responsibility for maintaining trust between the parties involved and the security of the volume of data generated. Distributed, encrypted logbooks ensure this.

Possible applications of the IoT-blockchain duo

Agriculture can use IoT-blockchain solutions, for example, to securely track climate and soil impacts on crop quality and yields, but also to ensure more transparency along the entire production and distribution chain of agricultural products. For example, IoT-blockchain applications contribute to improving the traceability of food products, from farms to supermarkets and homes using IoT sensors.

Supply chain management systems can store information coming from sensors on the blockchain so that authorized stakeholders can query it in real-time and prepare accordingly for production and delivery operations. For example, IBM and Golden State Foods, a producer of food items, worked to use blockchain and IoT together to optimize processes. They used radio-frequency identification (RFID) to automatically track the movement of fresh beef, IoT devices to monitor temperature, and blockchain technology to orchestrate business rules between links in the supply chain.

Water resource management is another field where IoT-blockchain projects are potentially beneficial, especially for reducing water waste globally. For example, smart sensors can track water consumption and automate the closing of registers in case of leaks. Another application is combating river contamination. A project known as ‘Drone on the Volga‘ proposes to use drones with IoT sensors and blockchain technology to collect data on water contamination levels.

In the pharmaceutical industry, the use of the IoT- blockchain duo can address critical issues such as preventing counterfeit medicines by ensuring traceability and transparency from when products leave the factory to when they are purchased by the end consumer.

IoT sensors on blockchain can record the temperature, location, times, and status of containers during cargo transport in an immutable way.

Machinery maintenance can apply IoT devices to record the operational status of motors to lifts. With this, maintenance teams can monitor the blockchain to check if repairs need to be made, without changing any previous information, but can record the work eventually carried out.

In addition to these use cases, IoT and blockchain technologies used together can encourage sharing economy initiatives for goods and services by enabling transactions between IoT devices. For example, they can connect smart “things” to blockchains and thus facilitate commercial transactions and payments between devices, providing a sharing economy for the Internet of Things.

To learn a little more about the top startups that are investing in combining IoT and blockchain technologies to address security issues associated with the IoT ecosystem, click here. Some focus on improving IoT security, regardless of industry. Others focus on traceability and accountability in supply chains.