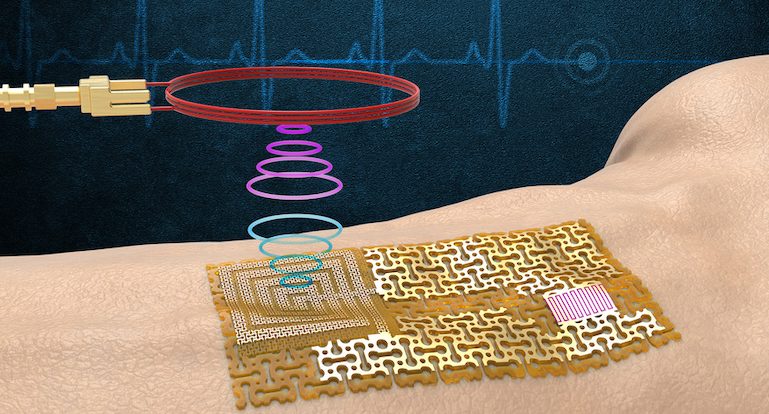 Engineers at MIT have developed a new type of sensor that dispenses with chips and batteries, communicates wirelessly, and can be used to detect and transmit pulse, heartbeat and temperature signals, for example. Unlike many current sensors that communicate via built-in Bluetooth processors and are powered by small batteries, the novelty uses another power source that allows it to take on smaller, thinner and more flexible formats.

The new sensor resembles an electronic skin with a design detailed in the journal Science. It uses an ultra-thin, semiconducting, flexible film that conforms to human skin like electronic tape, based on gallium nitride. This material has piezoelectric properties that can produce electrical signals responding to movement and vibrating in response to an electrical impulse.

The researchers showed that the sensor is sensitive enough to vibrate in reaction to heartbeats as well as sweat salt and that these vibrations generate an electrical signal that can be read by a receiver. In this way, it is possible to transmit information from the signals wirelessly and without the need for a chip or battery.

“Chips require a lot of power, but our sensor can enable very lightweight systems by dispensing with the use of processors and consuming a lot of power,” Jeehwan Kim, associate professor of mechanical and materials engineering and principal investigator at MIT’s Electronics Research Laboratory. “It is possible to adhere the sensor to the body like a bandage and pair it to a wireless reader on the mobile phone to monitor pulse, sweat and other vital signs.”

Previously, the group had previously developed a technique called remote epitaxy, which was employed to create ultra-thin, high-quality semiconductors coated with graphene. Using this technique, they have fabricated and exploited various flexible and multifunctional electronic films. In the latest research, the engineers used the same technique to create ultra-thin films of gallium nitride which, in its pure form, is a highly sensitive piezoelectric material and was applied as a sensor and wireless communicator of the vibrations between the films. The patterns of these waves can indicate heart rate or the presence of certain compounds in the skin, such as salt in sweat.

Sensors capable of integrating with the body for health monitoring, drug therapy or biological studies are gaining market share. One such class of devices are pressure sensors, whose global market size was valued at $11.4 billion in 2019 and is expected to reach $24.8 billion by 2027. Pressure sensing is fundamental to a wide range of medical applications, but can also be applied in other sectors, such as machine/robot-human interaction.

Recently, the Pritzker School of Molecular Engineering at the University of Chicago secured patents for building blocks for such sensors. The invention includes stretchable polymer semiconductors and transistor arrays that provide exceptional electrical performance, optimal semiconductor properties and mechanical elasticity. In addition, nanogenerators have been developed as a new technology to capture energy from user movement and associated storage systems.

The aim is to combine these advances to create devices that can be adhered to the skin or inserted into the body to detect real-time vital signs “much more” effectively than currently available options, according to the inventors.