Robots will increase the efficiency of data centers 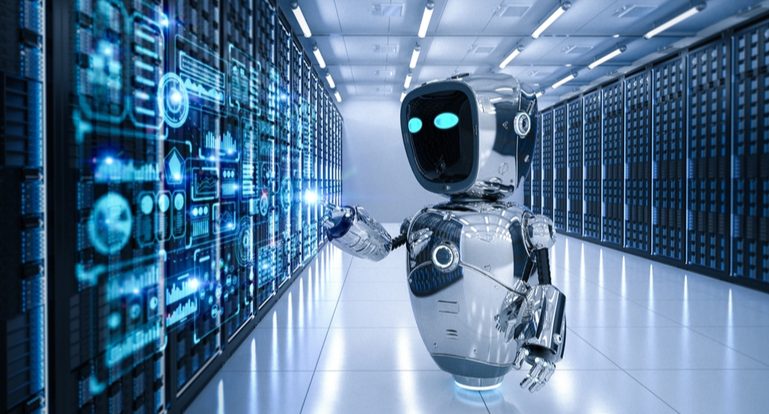 According to Gartner, by 2025, half of cloud data centers will deploy advanced robots with Artificial Intelligence (AI) capabilities, resulting in 30% greater operational efficiency.

They will be used mainly in right-sizing virtual machines and container environments and ensuring efficient use of resources with the aim of avoiding “cloud waste”.

There are four areas where robots, whether physical or software, will have the biggest impact on data center automation over the next five years, according to the consultancy:

Another consequence of automation is a greater focus on exception management within the IT operations model. As RPA and other forms of automation become more prevalent, people with analytical and problem-solving skills will be able to perform more strategic activities, leaving the operational to AI-enabled robots.

Implementing RPA software is not the same as building fully-automated platforms and processes from scratch. With basic RPA, a software bot literally does what a human would do. This includes routine tasks such as data retrieval and entry, button clicks, file uploads, and downloads…

But identifying which tasks to automate, with ROI in mind, is a key step in that journey.

“You probably wouldn’t want to automate a process that would save one person 30 minutes a month, but would take 100 hours of effort to automate,” ponders Matthew Tan, UiPath’s director of pre-sales in Southeast Asia.

So as automation and AI continue their forays, CIOs will need people who are skilled at assessing the overall benefits of automation. Will it help meet service level agreements? Will it help reduce the cost of operations?

Many data centre operators already use remote eyes to examine a situation before deploying human hands, especially as Covid has reduced people’s ability to travel and discouraged unnecessary visits. The pandemic has forced workers to distance themselves or ensure social distancing in the workplace, which can be a challenge in a data center.

Mark Hamilton was in charge of setting up Nvidia’s Kao Data Center supercomputer in Harlow, UK, but he’s never seen it. “We bought one of these little telepresence robots – it actually has an Nvidia Jetson GPU with Arm cores in it – and it kind of spins on two wheels and has a tablet,” he told the DCD website.

“This system is halfway around the world,” Hamilton said. The company eventually installed doors that opened automatically so the robot could enter the hot corridor unhindered.

Google hopes to deploy more advanced systems in its data centres but is wary of the complexity their facilities represent. “When it comes to robotics, our hyperscale data centres are more like warehouses and most processes require a robot to navigate to a specific location to perform a task,” said Google’s vice president of data centres Joe Kava.

Facebook also has a team dedicated to managing robotics solutions to automate and scale data center infrastructure operations.  And at Alibaba, a more advanced system is in operation at five of its data centers. The second-generation Tianxun robot is powered by AI and can work without human intervention to automatically replace any faulty hard drives.

The switch has created a security robot called SENTRY – a fully autonomous system that can navigate on its own, record and assess its environment, equipped with 360-degree cameras, heat sensors to check the temperature of visitors, and more.

In an interview published on the Data Center Frontier website, Scott Noteboom, a data center expert, said that robots can create a fully optimized machine environment without the involvement of humans. He has developed AI agents that can listen to the sound of generators and point out anomalies.

And the impact of AI is gigantic

Artificial Intelligence is being deployed for many purposes in data centers, enabling fissile and software robots to monitor, locate, inspect and replace faults in facilities. In addition, using Internet of Things devices and the data collected by them, performance problems can be easily resolved proactively.

In addition, a capacity planning deployment will manage a load of power, computing resources, and other IT assets to meet customer demands.

But as ManageEngine’s Monisha Ravi rightly warns in a piece published on the company’s blog, while AI complements human efforts in data centers, there are some grey areas that need constant attention. “Industry standards covering the monitoring of AI deployments are needed to avoid violations and costly penalties and streamline implementations,” she says.

Here are some interesting articles, selected by Monisha Ravi, highlighting various use cases and recommended practices for using robots and AI in data center operations:

1. Exploring The Impact Of AI In The Data Center

A good alternative to the conventional method of hiring staff to maintain and monitor data centers is to deploy AI. Not only can it handle tasks like server optimization and equipment handling, but it can also help with data and network security, and energy conservation within the data center.

2. Role of Chatbots and Automation in Data Center Optimization

In well-equipped data centers, AI is used for data management, IT workload management, and cost management. Now, with chatbots in the picture, several tasks are automated to attain optimized results. Further, these bots can be leveraged to provide better interaction and user experiences based on the needs of the IT teams.

3. AI in Data Center Operations: The Effects of Artificial Intelligence

Another use-case revolves around increasing our reliance on the services that data centers provide. This is delivered by using predictive algorithms to take actions regarding power and latency to keep up the performance. In addition, every IT component can be investigated through AI, which is augmented by advanced monitoring.

To establish optimal performance, AI provides an understanding of expected vs. actual scenarios. This gives a level of insight for effective performance monitoring, which helps save cost and energy. Also, with exception reporting, teams can adopt a needs-based approach and still achieve efficiency in monitoring and maintaining data center operations.

While scaling out the infrastructure for growing data needs and analysis, data scientists and IT admins must work closely to determine the requirements for AI to become a valuable part of the operations. AI is supported by machine learning (ML) a subset of AI that provides the algorithms and techniques to make the computer learn, and deep learning (DL) that is often described as the evolution of ML. Further, setting benchmarks and metrics when determining scalability will help choose an approach that’s suitable for AI to be incorporated in the data centers without causing any challenges.