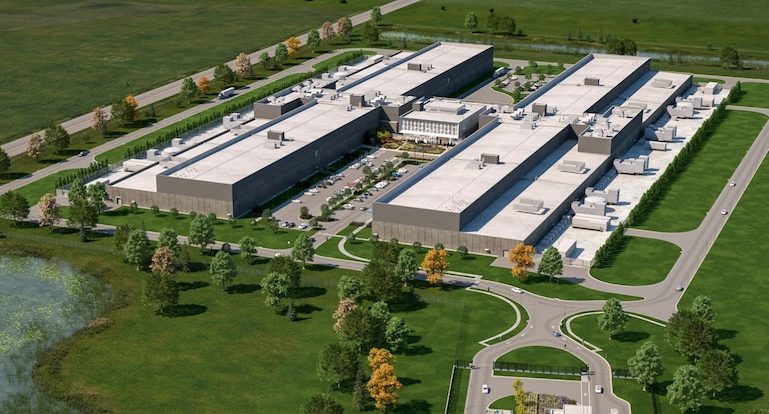 Meta, a conglomerate of technology and social media companies including Facebook, has teamed up with researchers from the University of Illinois Urbana-Champaign (UIUC) and Ozinga to formulate, using Artificial Intelligence, green concrete. Initial results revealed the new formulas based can reduce the carbon footprint of concrete by 40%, without losing strength or durability.

Meta has tested the new green concrete on several structures at its DeKalb data center, such as slabs and temporary offices. “We have developed new formulations that almost halve the carbon impacts of concrete, as strong or stronger than traditional formulations,” says Lav Varshney, associate professor of electrical and computer engineering at UIUC. “Given the popularity of concrete, there is a global scale of possible applications.”

Cement has historically been combined with other ingredients, such as water and sand, to produce concrete. However, cement manufacture is responsible for large volumes of carbon emissions, partly because of the fuel used to heat some of the ingredients to 1,400 degrees Celsius. In addition, one of these main ingredients is limestone (or calcium carbonate), which releases carbon dioxide during calcination in the manufacturing process.

To replace cement in the concrete mix, researchers had to develop a formula that would result in a product that was resistant, durable and viable (easy to spread). That’s where Artificial Intelligence came in. A model using a dataset on concrete compressive strength, publicly available in the UCI Machine Learning Repository. That database brings together over a thousand concrete formulas along with validated attributes. The carbon footprint associated with the concrete formulas was calculated using the Cement Sustainability Initiative’s Environmental Product Declaration tool.

The Artificial Intelligence model was able to generate several promising new mixtures that replaced cement with other materials. The final recipe was tested and refined by Ozinga, taking into account factors such as expected weather conditions and availability of these materials before being used at Meta’s DeKalb data centre

Less than two years after announcing the data center in DeKalb in 2020, Meta is adding three more buildings to the site, more than doubling its size, Tom Parnell, Meta’s communications manager, told Data Center Knowledge. Two buildings from the original announcement are still under construction, with 75% of construction already completed, according to Meta data. The data center expansion will see an investment of more than $1 billion.

When initially announced, Meta highlighted that the new data centre would use 100% renewable energy in the data centre and said the buildings would receive Leadership in Energy and Environmental Design (LEED) Gold certification for sustainability during construction. The new green concrete is another step by Meta towards sustainability.

A paper on a new green cement formula has been published in the Proceedings of the ACM COMPASS 2022 Conference, which will be held at the end of June, and addresses issues associated with sustainable computing and society. The research was funded by the Meta Sustainability Net Zero programme and the Illinois-IBM Center for Cognitive Computing Systems Research (C3SR).

Another similar initiative was announced in 2020 by data centre developer Compass Datacenters and CarbonCure. CarbonCure’s technology injects recaptured industrial CO2 into the concrete manufacturing process, significantly reducing the volume of cement required in the mix, as well as removing CO2 from the atmosphere. CarbonCure estimates the CO2 footprint reduction to be 1,800 tonnes per campus, on average. This is equivalent to 2,100 acres of forest or the travel of a car for 6 million kilometres. According to the company, cement production accounts for 7% of CO2 generating globally. “CarbonCure’s mission, alongside many of the world’s leading concrete producers, is to eliminate 500 megatonnes of CO2 emissions from concrete production annually,” says Rob Niven, founder and CEO of CarbonCure Technology.