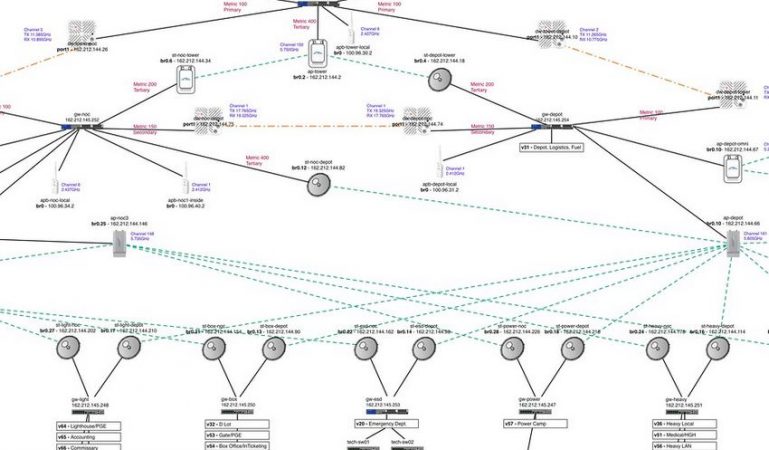 Let us look at 3 very popular products on the market

There are roughly two different solutions when it comes to network mapping. Some very powerful IT monitoring products offer their own mapping (in the form of a clear dashboard including various diagrams) in their comprehensive solutions – and there are the pure mapping tools, which do not have so much in addition to their actual, rather narrow functionality. Here, we briefly introduce the products Network Topology Mapper, Nmap, and Paessler PRTG and give a subsequent recommendation for sysadmins who monitor more or less comprehensive networks.

Solarwind’s Network Topology Mapper (NTM) clearly focuses on mere network mapping. Unlike Solarwind’s Network Performance Monitor (NPM), this tool does not have different functions to measure the actual network performance. Though the initial building of network maps in NTM may sometimes take some time, it provides very useful live updates, which is why the initial time investment will be worth it.

– NTM can create several different types of network maps from a single scan.

– The inclusion of an automated scan feature is helpful when the user already has an established network that needs to be mapped correctly.

– This automated network mapping allows the entire network to be detected so that network topology maps can be created. It also lets users edit the node details of map objects and manually connect network devices.

– Users can choose to discover their network using SNMP, WMI, ICMP, CDP, or any other discovery method.

– Also, users can export their network maps to Microsoft Visio, or PDF and PNG formats.

NTM is a good tool for anyone who has enough time for the initial setup and who does not want to monitor their entire network across the board. For this, it would be necessary to use NPM.

Paessler’s PRTG Network Monitor is a well-known all-inclusive monitoring solution with outstanding reporting capabilities and clear dashboards. In addition to the popular PRTG Network Monitor, there are also special offerings for hosted monitoring (PRTG Hosted Monitor) and for a more comprehensive enterprise environment (PRTG Enterprise Monitor). Mapping and dashboard functionality is identical in all three solutions.

– Maps in Paessler PRTG are what you might also call dashboards. A customizable space to clearly display an IT network and various dependency diagrams.

– Custom dashboards can be designed as HTML web pages that visualize extensive monitoring information in a way that is actually meaningful.

– For presentation purposes, it is possible to publicly display maps on large screens in offices, data centers, or factory floors, for example, and provide employees with useful information.

– And, of course, it is also possible to create informative reports based or built on the previously defined dashboards.

– Two major advantages of Paessler PRTG compared to the other two solutions presented is that it is suitable for larger enterprises as well as providing extensive and award-winning IT monitoring in addition to the actual mapping.

Unlike both NTM and Paessler’s PRTG, Nmap is a free, open-source network mapping tool. Like NTM, it specializes in displaying the individual elements of a network and does not offer any further monitoring functionality.

– Nmap uses IP packets to determine which hosts are on the network and which services are offered by these hosts. It identifies operating systems, firewalls, and other information.

– The tool runs on Windows, Linux, and Mac OS X and can be linked to other solutions in the Nmap suite such as Zenmap, Ncat, and Nping.

– Nmap requires some training but once the basic settings are taken care of individually, new maps and diagrams will get you where you want to go in a time-saving and effective manner.

– This tool is a great option if you work in a small company that doesn’t have the budget for a commercial tool and doesn’t have a problem with the fact that Nmap only supports network mapping.

We hope that this brief overview of network mapping tools has helped you get a first impression of the different solutions available on the market. If you start some research on your own, you will find out that the three solutions mentioned are only representative of many others out there. Have fun choosing your future network mapping tool!

What is network mapping?

Network mapping can be used as a means to an end but it facilitates the work of system administrators in many different ways.

For starters, let us look at what network mapping is actually all about. At its core, network mapping describes a process of creating a well-structured, logical, and visual map of a network in order for users – usually, but not exclusively, system administrators – to better understand how the various components are linked together.

Comprehensive IT monitoring solutions often include network mapping tools as these can play an important role in subsequent network optimization. However, there are also dedicated network mapping (and network topology) tools. Detailed network maps can be useful resources in many cases, especially when sysadmins are conducting performance tracking. That is because these maps can help to quickly identify performance bottlenecks. They can also give an insight into where opportunities for improvement lie.

Ultimately, a well-functioning network mapping even has a measurable impact on other business processes and, by optimizing network performance in different ways, the quality of service for end users could be significantly improved.