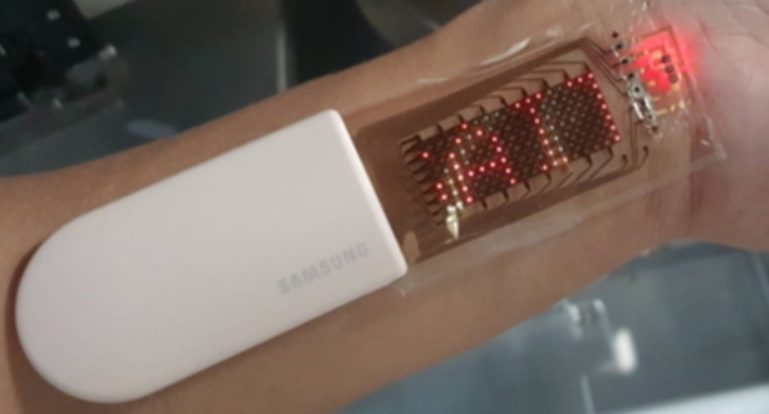 The Samsung Advanced Institute of Technology (SAIT) is moving towards flexible displays that, like rubber bands, can be stretched in all directions to change their shapes. According to an article published in early June in the journal Science Advances, the first applications of this new type of material should be in healthcare, with heart monitors. The new technology has the potential to overcome the limitations of current stretchable adhesives.

Samsung’s research group claims to have been able to integrate an organic stretchable LED (OLED) screen and a sensor (PPG) into a single device to measure and display heart rate in real-time, creating a ‘stretchable electronic skin’. According to Samsung, the success of this initial phase of research also demonstrates the viability of use in other applications.

“The advantage of Stretchable Devices is their ability to measure biometric data over a longer period without the patch needing to be removed when the user sleeps or exercises. In addition, the biometric data is visible on the screen, so there is no need to transfer it to an external device,” explains researcher Youngjun Yun, author of the paper.

The extendable sensor allows continuous heart rate measurements to be taken with a high degree of sensitivity compared to current wearable models, as it has better adhesion to the skin, which minimizes performance inconsistencies caused by movement.

The main breakthrough achieved by the researchers was to modify the composition and structure of the elastomer and use current semiconductor manufacturing processes with the substrates of stretchable OLED screens and optical blood flow sensors. With this, it was possible to guarantee the normal operation of the screen and sensors even with an elongation of up to 30%.

Elastomer is an advanced material with high elasticity and resilience, but it is vulnerable to heat, which limits its usability by current semiconductor manufacturing processes. To overcome this obstacle, Samsung researchers have strengthened the material’s thermal resistance by adapting its molecular composition. On the other hand, they have also chemically integrated certain chains of molecules to increase the materials’ resistance to manufacturing semiconductors.