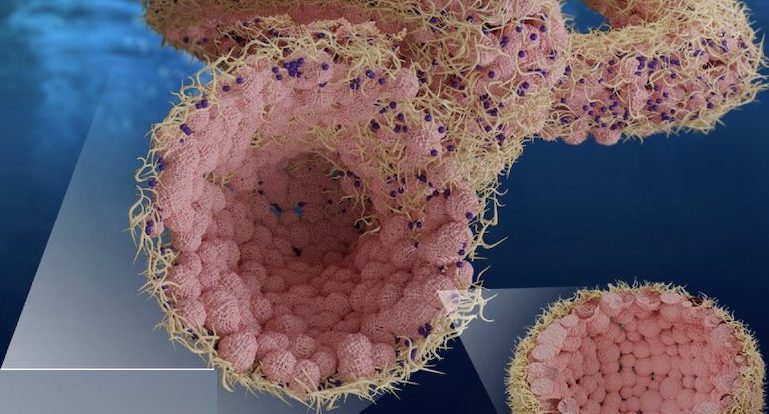 A new class of robots is expected to expand technology in the fields of medicine and the environment. They are the so-called aquabots. The novelty, made predominantly of liquids, was presented in a paper published in ACS Nano by researchers from the University of Hong Kong (HKU) and Lawrence Berkeley National Laboratory.

These aqueous robots are produced using elastomers and can be flexed with ease. Using aqueous two-phase systems, the robots are composed of structures that extend from nanoscopic to microscopic scale. They can adapt their shape to hold and transport objects and be used for targeted photocatalysis (catalyst-accelerated photoreaction), delivery and release in confined and tortuous spaces.

“We are involved in developing interfacial and adaptive material assemblies based on the oil-water and water-water interface using nano particles and polyelectrolytes. Our idea was to structure liquid materials whose Shapes are dictated using external forces to generate arbitrary shapes or all-liquid 3D printing to spatially organize these structures,” Ho Cheung (Anderson) Shum, Thomas P. Russell and Shipei Zhu explained to the TechXplore website.

Possible applications for the aquabots noted by the researchers include medical micromanipulation, targeted charge delivery, tissue engineering and biomimetics.

Another class of sub-millimetre-scale robots has been proposed by scientists at Northwestern University. These crab-shaped minirobots have the potential to perform delicate surgeries such as suturing or cleaning arteries, or tracking cancerous tumours. According to the researchers, the limitations of structures and materials that can be used in such robots create operational and performance challenges that they are seeking to overcome. The researchers have also developed a version similar to worms, crickets and beetles.

Scientists from Stanford University have revealed in an article in Nature Communications an amphibian robot inspired in the shape of origami with great potential for biomedical applications, according to its creators. With a millimetre scale, it is magnetically driven and integrates multimodal locomotion resources to, for example, direct liquid medication through the human organism or, integrating mini-cameras and tweezers, help in endoscopy and biopsy exams.

According to the scientists, existing millimetre-scale origami-shaped robots generally use separate geometric components for locomotion and function execution, increasing their complexity. Besides, none can move on both hard and watery surfaces, such as amphibians, as biomedical environments usually are. The recently presented novelty seeks to overcome these barriers.

For speaking robots used in medical applications, research already points to the potential of this market. Statistics reveal that this sector was valued at US$ 10.88 billion in 2021 and should reach US$ 44.45 billion by 2030, with a compound annual growth rate of 17.1% between 2022 and 2030.

Nanorobots are becoming feasible with technological advancement and have boosted the demand for minimally invasive robot-assisted medical procedures that ensure faster and less painful recovery. Moreover, growing elderly population and chronic diseases such as cancer, diabetes, and arthritis are driving the growth of the medical robotics market.

Besides minimally invasive surgical procedures, the medical robotics market encompasses other products and services, such as logistics and handling systems, rehabilitation, assistance, diagnosis and imaging, telemedicine, among others. Rehabilitation robots, for instance, can be programmed using artificial intelligence mechanisms to help stroke victims recover. Assistive robots can have a more empathetic appearance and help in the care of elderly or disabled individuals. Robots working in the handling area, on the other hand, can perform routine tasks that can still bring risks to humans, such as sterilizing instruments or delivering medical supplies in potentially contaminated areas.

Miniaturized surgical robots will soon make their way into space. NASA is planning to take its MIRA (Miniaturized In Vivo Robotic Assistant) to the International Space Station (ISS) by 2024. The robot, weighing 2 pounds (0.91 kilogram), will test its skills in space by simulating within a microwave-sized space activities performed during surgeries, such as cutting tissue. The intention is for the minirobot to be used in the future in tight spaces typical of a space mission.

“The MIRA platform is designed to give robotic assisted surgery equipment the power of a mainframe in a miniaturized size, aiming to make it accessible in any operating theatre on the planet. Working with NASA aboard the space station will test how this technology can make surgery accessible in even the most distant places,” said John Murphy, CEO of Virtual Incision, responsible for developing the solution.

Let’s not forget that various technologies developed or applied by NASA gained space (no pun intended…) in our day-to-day lives not long ago. The best known is the viscoelastic pillow, but others are part of the package, such as precision GPS, digital image sensors, food packaging, water purifiers and even invisible dental appliance components.