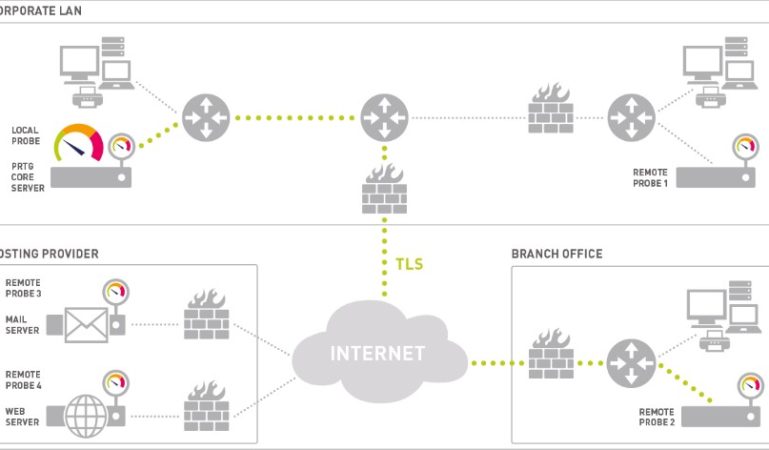 What is distributed (network) monitoring?

Why is it so important?

When people talk about distributed monitoring, they usually first think of large companies with multiple locations whose respective IT infrastructures need to be monitored. MSPs are also increasingly using this method to monitor their customers’ IT networks and to comply with agreed SLAs. But more and more companies are also storing their data in the cloud and moving to a decentralized data infrastructure. Unlike centralized infrastructures, which were mainly about the network performance of the head office data center and connected sites, this is no longer sufficient for today’s cloud-based services. Local internet gateways at each site as well as a dedicated data center and cloud-based services require a different approach to monitoring. We have looked at different solutions and give you an overview here.

PRTG Enterprise Monitor scales to large IT environments with thousands of devices and systems in multiple locations and provides an easy way to gain visibility and control over increasingly complex infrastructures. ITOps Board extends the PRTG installation with an additional service-oriented, central overview of multiple PRTG servers. This allows real-time dashboards to be created, providing a centralized overview of everything that matters.

For monitoring distributed locations, any number of so-called remote probes can be used with this solution at no additional cost. Alternatively, additional local probes can be installed and combined in ITOps Board. These options are perfect for companies with multiple branch offices as well as for IT service providers who want to remotely monitor customer networks without additional costs for distributed editions and thus guarantee significantly higher service levels. You can centrally monitor the entire corporate network as well as multiple customer networks, saving both administration effort and time.

Paessler has implemented the remote probe feature directly in PRTG Enterprise Monitor, enabling the monitoring of multiple networks with just one license. A special system architecture was developed for this effort-optimized and cost-optimized variant. The PRTG server is responsible for data storage, the web server, alerting, reporting, etc. The individual remote probes collect the relevant data and then send it in encrypted form to the PRTG server.

In this way, the monitoring of a worldwide IT enterprise structure is possible. The probes can either be installed in the same network as the PRTG server or in physically separate networks. The prerequisite is that they communicate with the PRTG server via the internet. This eliminates the need for time-consuming, multiple installations as well as the purchase of a large number of individual licenses or expensive “distributed” editions.

However, it is important to note that a separate WhatsUp Gold license is required for each central or remote server.

Together, the central and remote installations provide high visibility to multiple networks from one location.

Distributed Monitoring with Icinga is based on Master, Satellites, und Agents, whereby a master node is at the top of the hierarchy. A satellite is either a child of a satellite or a master node and agents ensure the connection to the master and/or satellite nodes.

A client can be a secondary master, a satellite, or an agent. It typically requests something from the primary master or parent node. The installation on each system is the same: You need to install the Icinga 2 package and the required plugins.

The Icinga 2 hierarchy consists of so-called zone objects. Zones depend on a parent-child relationship in order to trust each other. There are certain limitations for child zones such as their members are not allowed to send configuration commands to the parent zone members. Vice versa, the trust hierarchy allows, for example, the master zone to send configuration files to the satellite zone.

OpManager implements a sturdy Probe–Central architecture that makes it possible to scale as and when an enterprise grows and expands, without compromising reliability. The probes are set up at the remote network monitoring sites and the central server is designed to provide the required network visibility across locations and to report network health and performance stats over multiple remote probes.

OpManager eliminates the need of individual updates and configuration for every remote site. Central changes are reflected across all probes. Probes can be configured based on language, which eliminates the language barrier issue.

The licensing scheme for the probe can be shared across remote sites; however, distributed monitoring must be licensed additionally or is only included in the Enterprise Edition.